Happy Ass Day (to those who celebrate)

Be especially kind to your ass today.

Since the middle ages, this date - January 14 - has been the "Feast of the Ass" on Christian calendars.

Not kidding. See: "Feast of the Ass."

Note that donkeys, long the target of human abuse and ridicule, played significant roles in the Old and New Testaments of the Bible. (They are also nearly always present in the nativity scenes used in Christmas celebrations.)

In Christian legend, the humble, thoughtful donkey not only carried Mary and newborn Jesus out of harm's way (the Flight into Egypt), it also carried adult Jesus into Jerusalem (the Palm Sunday tradition).

Donkeys also were used extensively by Abraham and Moses. This was a deliberate choice, as there were horses, oxen and camels available.

They were the ONLY form of animal exempted from sacrifice instructions in the Book of Exodus. The sacrifice of the first-born male domestic animal was mandated in Exodus, but it was suggested that a lamb be substituted for a donkey.

The donkey and the ox were the only animals specifically mentioned in the Ten Commandments.

A deceased donkey - or at least its jawbone - came in handy for Samson when he tangled with those Phillistines. The bone turned out to be especially durable, as Samson was able to use it to dispatch a thousand of his enemies.

At one point in the Old Testament, a donkey was even given the power to speak! That donkey conversed with and actually scolded the prophet Balaam for beating him.

By the way, while it certainly is not part of the Bible, there is also an old legend that says the donkey that carried baby Jesus to Egypt was the SAME donkey that carried the adult Jesus into Nazareth. (A donkey lifespan is long enough to have done both.) They had a strong bond. That donkey supposedly lingered and followed Jesus to Calvary, and there witnessed the crucifixion. The donkey happened to be positioned so that the shadow of the cross fell upon its back. From that day forward, as a mark of the nobility and loyalty of the species, all donkeys have born the image of the cross. 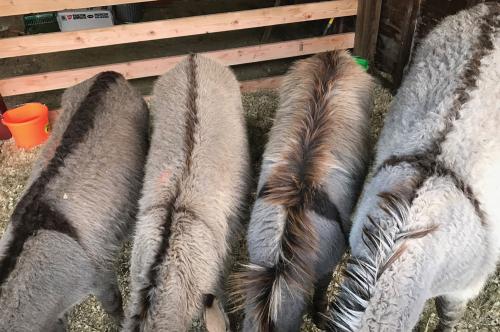