Taxes are complicated. Lies are simple 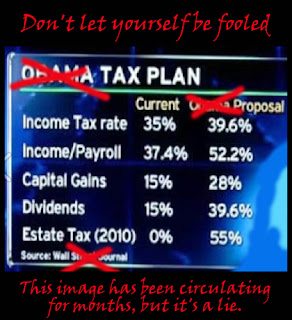 Taxation is a complicated issue. Americans seeking to understand it are not helped by false statements and graphics like this one (dating back to at least July). I checked around, and I see no record in the Wall Street Journal of these tax increases being attributed to President Obama's tax proposal. That's because the Wall Street Journal did not make these statements and would not make these statements, because they are entirely baseless and false. I've run through the statements contained in the graphic below to trace their origin and provide more accurate information. Some of the numbers in the image come from a projection of what MAY happen to the very top income brackets if CONGRESS allows all the Bush Era tax cuts to expire at the end of the year. Some of the numbers frankly come out of thin air and have no basis in fact. I looked closely at the Wall Street Journal and provide data from a couple of news articles ("More uncertainty for 2013" Feb. 18; &
Post a Comment
Read more
More posts