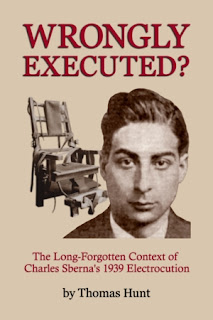 I have been finishing up a manuscript relating to the 1939 electric-chair execution of convicted cop-killer Charles Sberna. Sberna's name is frequently mentioned by opponents of capital punishment as an example of a wrongful execution. I first wrote an article on the subject years back for the On the Spot Journal published by the late Rick "Mad Dog" Mattix, and I have been accumulating additional information since that time. My original article (a version can be found on my American Mafia history website ) touched on the trial evidence and Sberna's criminal background. It argued that the evidence of Sberna's involvement with two other men in the killing of Officer John H.A. Wilson appeared inconclusive but that it would be a misuse of the word "innocent" ever to apply it to Sberna, who was a habitual wrongdoer. The data acquired since then - trial testimony and evidence, legal appeals, witness statements and tons of background material - has done l
Post a Comment
Read more
More posts