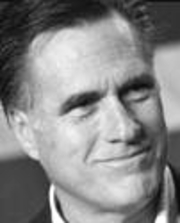 (In his own words) GOP Presidential nominee Mitt Romney has been remarkably flexible on a wide variety of issues, depending on the climate of the time and the audience before him. An observer might easily conclude that he actually has no personal position on any issue and is merely a political chameleon, blending in with whatever scenery he feels will best serve his political survival. His evolving theories on health insurance are particularly interesting, as the Affordable Care Act he now strongly opposes was a concept he personally installed in the State of Massachusetts when he was governor there. Here is a look at Romney's changing views of healthcare for uninsured Americans. I have used the GOP nominee's own documented words - pulling from recorded interviews and his own writings - to illustrate how his opinions have dramatically changed over time. It is important to note that not much time has been required for this evolution of thought. The entire process appears to
Post a Comment
Read more
More posts