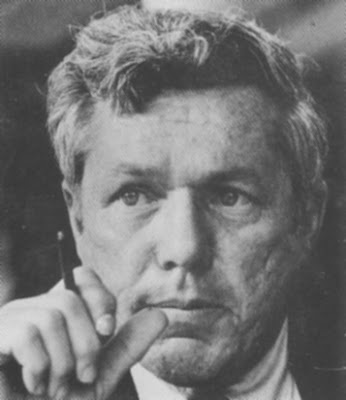 Just acquired a copy of The Other Nuremberg by Arnold C. Brackman. I don't know why it took me so long to get the book, which was released back in the mid-1980s. I suppose I was a little spooked by the fact that the manuscript was completed during the time I was Arnold Brackman's journalism student at Western Connecticut State University in Danbury. He died just after finishing it. Mr. Brackman was a dynamic and passionate teacher. He was physically small but had a presence that commanded attention and respect. I recall his gray, carelessly combed hair, his bright blue eyes, and his crooked fingers, flattened at the ends, likely from years of "hammering" news stories out of manual typewriters. I recall his preference for Foster's lager (I scrupulously avoid the beverage, waiting for an appropriate moment) and for watching baseball but nothing else on television. And I remember a scarf-like thing, with small pockets in the ends, that he wore on cold winter days. Mr
Post a Comment
Read more

Irene's coming for a visit

Looks like Hurricane Irene will be Tropical Storm Irene when she collides with Connecticut sometime on Sunday. (Perhaps the kids will have a "tropical storm day" instead of their first day of school on Monday.) The storm is currently sweeping up from the Bahamas. The "cone of uncertainty" - the collection of possible paths the storm will take - sweeps up the east coast of the United States. At this moment, Connecticut sits right in the center of the cone, meaning we're likely to experience heavy rains and strong winds no matter what course Irene finally decides. This image from NOAA is a look at how winds are expected to pick up over the next few days. It calls for tropical storm-level winds here in Connecticut.
Post a Comment
Read more
More posts