Showing posts from 2017
Show all

CIA joins with Mafia in effort to kill Castro

Some Kennedy assassination-related documents released through the National Archives last week (October 26, 2017) and earlier this year (July 24, 2017) discussed CIA cooperation with American organized criminals in an effort to assassinate Cuban dictator Fidel Castro. The documents revealed little about CIA-underworld interaction that was not already known to historians through other sources, but the release provides an occasion to reflect upon that interaction and its aftermath. Another release of documents is expected in six months' time. Any additional pages will likely be in general agreement with those we already have. The key features of the government-underworld conspiracy appear to be these: A small group of CIA officials decided to accomplish the assassination of Cuba's Communist President Fidel Castro by working with American Mafiosi, who had been deprived of Havana casino income by Castro's rise to power. No written approvals of the plan by top CIA adminis
Post a Comment
Read more

Many, but not all, JFK files released

TIME photograph Last night, the U.S. National Archives publicly released 2,891 previously classified documents relating to the Nov. 22, 1963, assassination of President John F. Kennedy. The documents are accessible to the public through the National Archives website . National Archives The release was made in accordance with a law passed in 1992, which required that assassination records be made public after 25 years. Then-President George H.W. Bush signed the JFK Assassination Records Collection Act on Oct. 26, 1992, setting a final release date of Oct. 26, 2017. A batch of 3,810 documents were released July 24, several months before the deadline. A last remaining batch of at least 3,140 files - many thousands of pages - remained secret through the final day, waiting on a release authorization by President Donald Trump. In the evening, President Trump issued a memorandum approving the release of 2,891 of the remaining files but permitting an additional six months of revie
Post a Comment
Read more 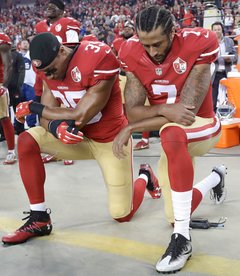 IF YOU'RE BLACK, you are about two and a half times more likely to be killed by a police officer. Sadly, that is the plain truth. I don't believe this is a reason to condemn police officers or our law enforcement system. The vast majority of police are dedicated and conscientious. But *something* is very wrong here. We need to look at it and discuss it and solve it. Pretending it does not exist and attacking those who are vocal about it helps no one and may be a major part of  the problem. Of the known uses of police fatal force in 2016 (963 documented incidents), 233 of those killed were African Americans. That amounts to 24% of the number killed. African Americans comprise just 13% of the U.S. population.  A total of 466 Non-Hispanic White Americans were killed in uses of police fatal force in that year. That amounts to 48% of the number killed. Non-Hispanic Whites comprise 61.3% of the population. When you equalize the casualty figures according to population, you find
Post a Comment
Read more

Informer - Aug 2017  - AVAILABLE NOW in print and electronic editions IN THIS ISSUE: - Excerpt from Dock Boss by Neil G. Clark, scheduled for release this summer by Barricade Books. It is the story of Eddie McGrath and the mobsters who controlled New York City's West Side waterfront. - Lennert Van`t Riet and David Critchley provide a groundbreaking history of Frank Zito's little-known but influential Springfield, Illinois, Mafia organization. - Justin Cascio explores the career and family connections of the "Capitano," Angelo Di Carlo, who held key underworld positions on both sides of the Atlantic. - Edmond Valin digs through government records to discover the identity of Bonanno Family informant, "Willie the Tilemaker" Dara. - Bill Feather provides details on the founding of twenty-nine United States Mafia organizations. - Richard Warner reviews books on an axe-wielding killer, the origins of street gangs and revered New York l
Post a Comment
Read more

I figured I would give Stephan Talty's new book, "The Black Hand," a try. Any book that gets a movie deal involving Leonardo DiCaprio before it even has been released must be good, right? After many years of research into the Black Hand, Joseph Petrosino, the NYPD Italian Squad and the early Mafia, I have some familiarity with the subject matter. I acquired the Kindle version as it was released this morning. (Fourteen-ninety-nine?! For a stream of electrons? Are you KIDDING me?) I quickly looked it over. I noted that it has an index, a bibliography and some endnotes - items important to those of us who do research. I set to reading it, but I didn't get very far before I found something troubling. Chapter 1 begins with a description of what Talty claims was the first U.S. murder performed by a Sicilian "Black Hand Society." This was the killing of Francisco (Talty spelled the name Fransisco) Domingo on January 3, 1855. According to Talty, the victim w
Post a Comment
Read more

The current issue of Vermont's esteemed alternative newsweekly, Seven Days , provides readers with a glimpse of my recently released book , Wrongly Executed? The Long-Forgotten Context of Charles Sberna's 1939 Electrocution . That such a fine periodical took notice of my work and decided it was worth sharing with readers is an honor. Thank you to Seven Days and to arts reporter Sadie Williams. See: "Page 32: Short Takes on Five Vermont Books," Seven Days , March 8, 2017, p. 23. Wrongly Executed? on Amazon.com.
Post a Comment
Read more

January 06, 2017
The Goodreads.com book giveaway has concluded. A total of 863 people entered for a chance to win one of three signed paperback copies of Wrongly Executed? . Winners, selected at random by Goodreads, were located in northern Illinois; Hillsborough County, Florida; and Hocking County, Ohio. Thanks to all who entered and to Goodreads for hosting the promotion.
Post a Comment
Read more 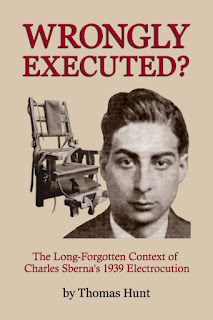 On this date in 1939: Charles Sberna was executed in Sing Sing Prison's electric chair. Though convicted of participating in the killing of an NYPD officer, many to this day insist that he was innocent. As the son of a fugitive wanted for orchestrating a series of bloody anarchist-terrorist bombings and the in-law of a family of Mafia leaders, could Sberna possibly have received a fair trial? ' Wrongly Executed? ' provides the details and historical background of the Sberna case. The story is a complex and controversial one, involving celebrity attorneys, underworld bosses, violent political radicals, media giants and ruthless establishment figures, all set in a period in which Americans sought stability and government-imposed order after years of political upheaval, economic depression and Prohibition Era lawlessness.
Post a Comment
Read more
More posts