Showing posts from July, 2011
Show all

July 13, 2011
I'm starting to think we need to bring a class action suit against the USPS for its blatant refusal to acknowledge the existence of low-cost Parcel Post and Media Mail shipping methods. If you doubt the need for this action, check on the problem yourself: Bring a package to your local post office and ask to ship it the cheapest way possible. You will be given a number of choices, none of which are as cheap as Parcel Post or Media Mail. Even if you know about these methods of mailing AND specifically request them, postal clerks will do their best to talk you out of them. Here is a recent conversation I had with a postal clerk: "I'd like to send this package by Media Mail." "What's in it?" "It's a book, and I'd like to send it Media Mail." "If there's anything other than a book inside..." "There's isn't. It's just a book. You can feel the book through the package, see?" "Because we hav
Post a Comment
Read more

July 12, 2011
As we're tightening our government-budget belts, it might be a good time to consider the money that would flow into municipal, state and federal coffers by removing the various tax exemptions from churches and similar organizations. These businesses pay no taxes on income or property, providing they do not engage themselves in political activity. Obviously, many DO engage in political activity. One church's whole reason for being seems to be to protest against the national agenda by picketing the funerals of fallen American service men and women. Another large church has for many years opposed political candidates based upon their views on the legality of abortion. That same venerable institution recently took a stand against the New York State Legislature's approval of same-sex marriage. So, the idea that churches have only other-worldly concerns is entirely a myth. On this grounds alone, the tax exemptions should be canceled, but no one in the government appears to be tak
Post a Comment
Read more 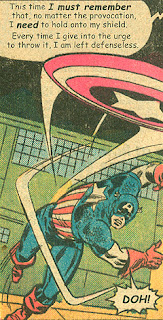 I hear that a movie about Captain America is due to open soon. I have to admit that I have always considered Captain America a bit of a national embarrassment. The guy's only weapon is a shield, and he doesn't even seem to know what it's for. Other superheroes have all sorts of nifty weapons and powers. Even Captain Canada occasionally wields a broken beer bottle - Molson, I believe. And I hear Captain Antarctica has a mobile penguin launcher that does all sorts of damage. Captain America doesn't even have a utility belt. How can you expect to be a superhero with just a shield and no utility belt? I've always felt that Thor was pretty lame as a superhero. But at least he's equipped with a hammer. When he's not clubbing criminals with it, he can use it on odd jobs around the house and can also make some pretty big holes in stuff. (The whole flying gimmick, in which he supposedly throws the hammer and then quickly grabs the handle to be carried along with
Post a Comment
Read more
More posts