Possibly I've been writing about crime history for too long. While rewatching It's a Wonderful Life recently, I couldn't help but compile a list of legal offenses presented within the 1946 holiday classic - charges ranging from child abuse to possible homicide. 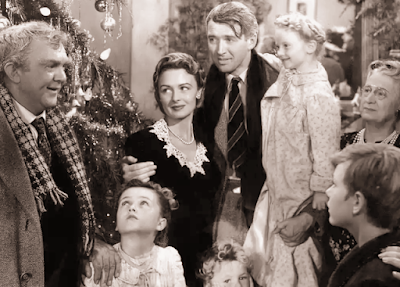 I know that I am not alone in viewing Wonderful Life with a critical eye.

The movie has long been criticized for a theme some feel instigates class warfare. (I always find it odd that so many Americans are more concerned over the possibility of friction between economic classes than by the actual existence of economic classes.) This accusation is particularly popular among America's Henry F. Potter-types. The movie actually was investigated by the FBI as possible communist propaganda. I don't find that charge credible.

Wonderful Life does encourage have-nots to constructively work together to improve their lives, using the example of the shareholder-sponsored and generous-spirited Bailey Brothers Building & Loan company operating in spite of the incessant scheming of the evil, bigoted and money-grubbing Potter. But the movie never even suggests taking anything that Bedford Falls one-percenter Potter would claim as his own. In fact, Potter is more influential and, through ill-gotten gains, at least $8,000 (more than $115,000 in today's money) wealthier at the end of the film as he is at the start.

But there is an impressive collection of criminality. I admit that some violations are not truly native to the movie's Bedford Falls. These occur only in the alternate reality shown to main character George Bailey by his guardian angel Clarence Oddbody, after George suggests it would be better if he had never been born. But they're still in the movie.

Even leaving aside the judgment calls: the suggested but not stated behavior of boy-friendly female character Violet Bick, the troubling sight of Bert the Cop aiming and firing at the back of fleeing alternate-reality George Bailey and the strange 1930s-era disappearance of all depositor funds from the Bailey Building & Loan (the business acquires extensive loans from Potter's bank, which are recalled, and has absolutely no money when depositors come to make withdrawals) the list is ponderous. And I'm not sure it is comprehensive. You may find additional charges on your next rewatching.

There may also be a case of premeditated murder, depending on what Mary Hatch specifically wishes (she's a little vague discussing this with George later) when she tosses the rock through the window of the Old Granville House (320 Sycamore) and whether in the movie's universe her wish actually triggers the fatal stroke George's father Peter Bailey suffers immediately after.

It can be (and has been) successfully argued that the film also illustrates other societal ills, including alcoholism, racism, and sexism.

Crime without punishment
Despite all these offenses, the only individuals who ever face any sort of comeuppance are Violet (arrested for something done at a dance hall) and the druggist, Mr. Gower (sentenced to 20 years for homicide). The law catches up with both, but only in the alternate universe. (To be fair, Violet, faces a probably difficult future in the movie's reality as well. Apparently shunned for her flirtatious ways, she leaves her hometown with little money to take her chances in New York City.)

But, basically, everyone, including the wicked manipulator Potter, escapes all consequences for illegal acts. The concept of justice is occasionally considered in suburban Bedford Falls, but it never actually makes an appearance. Wonderful Life viewers noticing all of this may well wonder if this is a movie about "white privilege."

Dreaming of a White Christmas?
It is worth noting that Bedford Falls (Pottersville, in the alternate universe) is, in fact, a very white place, every bit as white as the scenery of the snowy winter that fills the second half of the movie. There are just a few African-American actors in the movie.

The only non-white character with a name and a few scripted lines is the Bailey family's stereotypical domestic employee Annie. Other non-white actors appear as a couple of unnamed and unspeaking students at a barely integrated high school dance, the unnamed and unspeaking alternate-reality piano player at Nick's bar (but none of the many bar patrons) and possibly a couple of barely noticed Bedford Falls pedestrians. (I will leave it to others to speculate on how Wonderful Life might be different with a less melanin-deficient cast.)

Justice as menacing intruder
At the climax of the movie, hero George Bailey is threatened with the possibility of justice - he may be charged with a crime for the gross negligence of leaving his notoriously forgetful uncle in charge of all depositor funds. Justice instantly becomes a menacing intruder into his wonderful life.

Merely the idea of lawful retribution is so crushing that George is poised to commit suicide! He is kept alive only through the intervention of an outer-space God (who sends second-rate angel Clarence), responding to the prayers of George's friends.

God and community intervene
The Almighty's agent on Earth succeeds in coaxing George back from the precipice. In the movie's final moments, the entire Bedford Falls community, including Annie, turn out to the Baileys' holiday-decorated living room to contribute generously and prevent George from getting what is rightfully coming to him.

A court-issued arrest warrant is then ripped to pieces by a government representative, and even a strict, visiting bank official is so moved by spirit of Christmas corruption that he takes money from his own pocket to support the effort.

As all present launch into song, viewers may well feel that they are watching a joyous celebration of a large family - the large, Bedford Falls organized crime family.