When I was 10, I genuinely liked being 10 and didn't want to be anything other than 10. If later years happened to come my way, I'd accept them, but I was in no rush to reach them. As I passed through my teens and into my twenties, I found reasons to enjoy those years too, but never really wished to stay in any of them longer than my allotted time. When I hit 30 and then 40, I experienced no yearning to go backwards to childhood or teenage or young adulthood. Been there, done that.

(I am convinced, by the way, that those of later years who yearn to return to childhood, failed to truly experience childhood because they spent those early years wishing to be older. Just can't please some folks.) 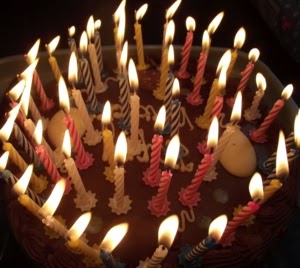 So, here is 50. I've heard many of my peers speak of the age with dread and quite a few with outright denial. Doesn't seem a bad number to me.

- It's the number of states in our Union; it's among my very favorite speed limits; it is elegant (perhaps that should read, "L-egant") as a Roman numeral; read as Five-O, it links to a classic television program with an excellent theme song; put together with a dash and a copy of itself it represents the fairest possible split.

- Fifty is mathematically special. It's a Harshad number (at least in our commonly used Base-10). While "Harshad" sounds a lot like "harsh," it isn't. The term comes from Indian words meaning "joy-giver" (how special is that?) and it applies to numbers divisible by the sum of their digits. Less than half of ages from 1-50 are Harshad numbers. It is also a "magic number" at least in the physics of atoms.

- The number 50 is important to the history of our national currency. Our 50-dollar bills continue to honor Ulysses Grant, who played such a major role in holding our country together (the bills do this despite misguided efforts by some to insert in them the face of a B-movie actor who played a major role in splitting our country apart). Our 50-cent pieces were the last American "silver" coins to actually contain any silver.

- In sports, 50 was the number worn by two other November-babies who became big-league pitchers: John "Candy Man" Candelaria played on the 1979 World Champion Pirates; Jamie Moyer, who will still be 50 years old until the 18th of this month, set the record as the oldest pitcher in MLB history to win a game and played for eight teams through portions of four decades. Fifty was the number worn by Chicago Bears great Mike Singletary. I wasn't a fan of his, but he did wear the number. It was also worn by linebacker (and occasional tight end) Mike Vrabel of the Patriots, and I certainly was a fan of his.

- Fifty, as in the year 1950, marked the best color cinematography oscar of the great John Wayne western "She Wore a Yellow Ribbon," and also the start of the Kefauver Committee hearings, the birth of the Charles Schulz comic strip Peanuts and the invention of mobile pagers. Looking back a century to 1850, the year marked the swearing in of that great American president, Millard Fillmore, last Whig to occupy the White House and one of only five men to hold the top U.S. office without ever winning a Presidential election.

Fifty is also memorable, which is a good thing where age is concerned. When you're in your middle and late forties, you tend to lose track of birthdays and are liable to be momentarily embarrassed when someone asks you your age. (Your eyes roll back as you mentally subtract birth year from current year and try to recall if you've celebrated your current-year birthday yet.) Once you hit 50, you will surely know your correct age for the next twelve months.

The age of 50 comes with some privileges. While it isn't quite old enough to begin telling strangers how to raise their children, it does entitle you to membership in AARP and a bunch of AARP-card-related discounts. Many of these discounts relate to car rentals, hotel stays and other vacation-oriented spending. These aren't especially interesting to me, as I don't travel very much. But, with AARP card in hand, any 50-plus-year-old is entitled to a free Dunkin' Donuts doughnut with the purchase of a large beverage. I'm sure to take advantage of that one. And I might actually visit Denny's for an occasional late-day meal just to get my 20% off. (There are also discounts at Papa John's pizza restaurants. We have no local Papa John's, and that actually suits me fine, as I think the owner's a jerk and wouldn't eat there anyway.)

All things considered, 50 is a very likable number. And those who fear attaining it should consider that it has been out of reach of many talented and influential people. Martin Luther King Jr., John Kennedy, Robert Kennedy, Princess Diana, Alexander the Great, Egyptian Pharaoh Tutankhamun, even Jesus Himself didn't make it to 50. John Lennon, Jim Croce, Freddie Mercury, Elvis Presley and Mozart never got there. Marilyn Monroe, John Belushi, Patsy Cline, Jiles "Big Bopper" Richardson, Jayne Mansfield, Lenny Bruce, "Mama Cass" Elliot and many others from the entertainment industry didn't even get close. And let's not forget Edgar Allen Poe, George Orwell, Vincent Van Gogh... With all they accomplished, blowing out 50 candles on a birthday cake was a feat that eluded them.

Probably we all have relatives and friends who didn't make it to 50, though they really deserved to. But getting to 50 is as much about plain, dumb luck as it is about anything else.

I suppose a big part of liking your age, whatever it happens to be, is understanding and feeling connected to the history that coincides with your lifetime.

I arrived - with some help from Mom and Dad, of course - in early November of 1963. At the time, Joe Valachi had just begun telling anyone who would listen all he knew about the American Mafia. John Kennedy was still President and would be for another couple of weeks. The Dodgers had just swept the Yankees in the World Series.

Earlier in the year, the debut album from The Beatles thrilled music fans, Alfred Hitchcock's "The Birds" frightened moviegoing audiences and the motion picture general release of "To Kill a Mockingbird" (rated "Not Suitable for Children") delivered powerful messages and left lasting impressions. Other movies of the year were Cleopatra; It's a Mad, Mad, Mad, Mad World; Dr. No; Bye Bye Birdie; and 55 Days at Peking. The Beach Boys (Surfin' USA, Surfer Girl), the Chiffons (He's So Fine), Peter, Paul and Mary (Blowin' in the Wind), the Four Seasons (Walk Like a Man), the Miracles (You've Really Got a Hold on Me), the Drifters (Up On the Roof) worked their way up the pop music charts. And Sam Cooke, Marvin Gaye, Dion, Bobby Darin, Elvis and Ray Charles were getting plenty of play on radio as well.

On television, Americans watched Dick Van Dyke, Andy Griffith, the Flintstones, Petticoat Junction, the Beverly Hillbillies, Mister Ed, and a relatively new late-night host named Johnny Carson. Just two months before I entered the world, the CBS network gambled by increasing its nightly news program from 15 minutes to a half-hour. It was a fairly risky decision, as the program's host, Walter Cronkite, had only first sat down in the anchor chair a year earlier.

The world's first geosynchronous satellite was put into space by NASA in 1963, and it was almost immediately used for worldwide communications and low-quality television transmission.

The second period of the Second Vatican Council was under way in Rome, led by Pope Paul VI. Among its goals was the initiation of a dialogue between the Catholic Church and the contemporary world (apparently still a work in progress). The council's first period, led by Pope John XXIII, had ended in 1962. (Pope John XXIII died in June 1963.)

The American Civil Rights Movement was hitting its stride in 1963. The March on Washington and Martin Luther King Jr.'s "I have a dream" speech took place that year and were very recent memories at the date of my birth.

About a year before my arrival, the first popular computer game was invented - the two-player "Spacewar." It was written on a DEC PDP-1 "mini-computer." ("Mini" at the time meant that it did not entirely fill a room.) Microcomputers, like the one you are using right now, were merely a fantasy at that point, but the seeds of what would become the global Internet already were beginning to sprout.

It turns out I am very much a product of my history, and I suspect we all are. I haven't the time (or, frankly, the desire) to cover all the life-changing and perspective-altering events of the half-century between 1963 and now. But I know that they are all recorded within me somewhere. Today, I am 50, and all the experiences of my (first?) half-century of existence comprise what I am. They influence to some degree what I say and do, the music I listen to, the books I read, the folks I vote for, the things I value and dream for and despise.

I hope that I have managed to convince a few people that reaching the half-century mark isn't bad and that 1963, now slipping into our distant past, was nevertheless a great time to be born. I'm sure a number of my peers will continue to feel anxiety over nearing/reaching/passing age 50. But, for me, it is a good number. And it is the only number that truly suits me at this moment.