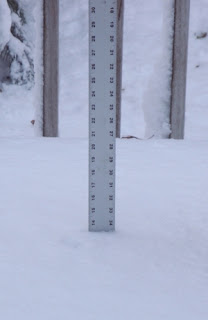 All of our "modern conveniences" (heat, light, water, and other luxuries) have been restored, but we had a difficult time last week. A freak snowstorm dumped about 14 inches of snow here in New Milford, CT, and was similarly brutal across much of southern New England and portions of New York. Coming, as it did, on October 29, the falling wet snow encountered many trees full of brightly colored leaves. The added weight to tree limbs caused all sorts of destruction - toppled trees, broken branches, snapped powerlines, blocked roadways. And about 102 hours of cold, quiet, darkness at the Hunt home.

We used melted snow to flush the toilets, candles and flashlights to see at night, and the propane grill to cook. We huddled in the basement for warmth at night - nighttime temperatures outside were well below freezing, inside reached into the forties. Though somewhat creepy, the basement was nice and warm.

Our power company, CL&P, has a great deal to answer for. Still reeling from the "once-in-a-lifetime" hurricane that caused massive Connecticut power outages in late summer, the company was slow to respond to the autumn snowstorm (MANY were in the dark far longer than we were, and some are just getting power back now) and was found to have been cutting back on its maintenance budget in recent years, even as it posted enormous profits. An independent investigation into CL&P performance has started. I'm convinced that a number of dramatic changes will be called for.

While the continued outage left us greatly inconvenienced and frustrated, there were some positives to the experience. The kids rediscovered the fun of boardgames and cardgames and neighborhood friends and even their family. With luck, the memory of the happy moments we created together during trying times will not fade during the electronics-filled days ahead.